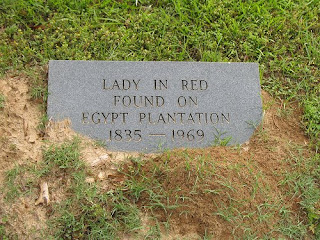 Gravestone for The Lady in Red
Final Resting Place in Odd Fellows Cemetery
Lexington, Holmes County, Mississippi
(Photographed by Natalie Maynor)
The date of birth shown on the Lady in Red's grave stone is the result of expert analysis of her age. Since there is no way to determine her date of death, the date shown on the grave stone is the day her body was discovered on Egypt Plantation.
Posted by Janice Tracy at 3:20 PM