Bradford Chapel Cemetery, located near Dentontown, in rural Calhoun County, Mississippi, contains over 200 graves. As the sign over the gated entrance to this cemetery states, the cemetery was "Est. 1900." 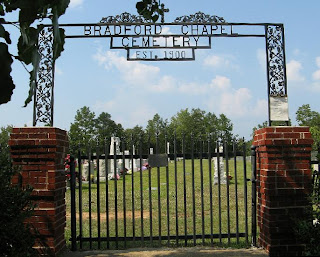 Although this cemetery is not quite as old as others in the county, with a majority of its graves dating back less than seventy-five years, a small percentage of the deceased were born in the mid-late 1800s. Among those buried in Bradford Chapel Cemetery are several generations of the Baker, Bingham, Bradley, James, Pendergrast, and Sprayberry/Spaberry families.
Posted by Janice Tracy at 1:59 PM No comments: 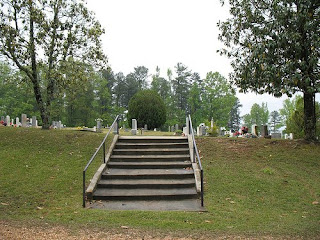 The steps pictured here take visitors to the small plateau that is Double Springs Cemetery, located near Maben, Mississippi. Among those buried in this cemetery in Oktibbeha County are dozens of deceased members of the Fulgham, Stallings, and Turner families. Although many buried here were born during the early 1800s, the cemetery continues to be the site of burials even today. One of the oldest graves in the cemetery is that of Osborn Brewer, who was born on April 5, 1804 in Tennessee, and who died on September 11, 1876 in Choctaw County. Oktibbeha and Choctaw are both counties formed from lands acquired after The Treaty of Dancing Rabbit Creek was signed with the Choctaw Nation.
Posted by Janice Tracy at 9:25 PM 1 comment: 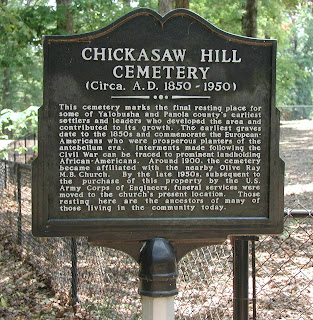 As the marker states, this is one of the oldest cemeteries in the area. Soon, I will be posting photographs of grave stones and stories about families buried in this historic cemetery.
Posted by Janice Tracy at 2:10 PM No comments: 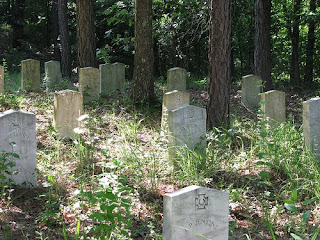 Posted by Janice Tracy at 8:13 AM No comments: 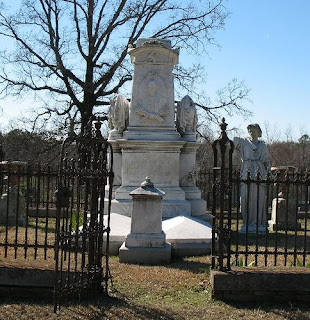 The inscription underneath the relief on his grave monument says "Sacred to the Memory of Dr. Cowles Mead Vaiden,
Born in Charles City Co., VA, April 21, 1812
Removed to Mississippi in 1837
Died in Carroll Co., Feb 6, 1880"

The statue of an angel sitting to the right of the large marble monument in Vaiden Cemetery once graced its top. During a tornado in 1989, the statue was blown off and decapitated. Although the angel's head was later found and reattached, an arm and a wing were never recovered. A full description of this large marble monument can be read here. The death of Dr. Cowles Mead Vaiden, for whom the town of Vaiden, Mississippi in Carroll County, Mississippi is named, prompted the newspaper notice below:

"A good man has fallen in ! is called to mourn the death of one of her best and most public-spirited citizens. Dr. Cowles Meade Vaiden, whose good deeds these columns have so often recorded, died, after a lingering illness, at his home in Carroll county at 2 ó clock p.m. yesterday, February 6. We have barely space to make this melancholy announcement. On another occasion, we will endeavor to produce a tribute benefiting the lofty virtues of the lamented deceased."

As stated above, the newspaper later published a full-blown obituary for Dr. Vaiden, as shown here:

"Though the health of Dr. Vaiden had been bad for years and disease had wasted his frame, he had resisted its gradual encroachments with so much resolution and borne his afflictions with so much unfailing fortitude, that few of his friends realized that he was for a long time on the brink of the grave, and when at last his physical forces succumbed to the destroyer, they were unprepared for the melancholy announcement that his brave and gentle spirit had indeed passed through the shadow of the dark valley and entered into life and immortality beyond. He was born in county, Virginia, on the 25th day of April, 1812, and died at his home in Carroll county, , on the 6th of February, 1880. He had not therefore, attained the years of his life, threescore and ten, allotted by the Psalmist. He received his education in the county where he was born, and in his seventeenth year, seized with the desire to pave his own way through the world upon the actualities of which he had entered, he removed to and engaged in teaching school. At the same time he devoted himself to the study of the higher branches of education. He afterwards studied medicine and received his diploma from the famous school in which has given so many successful practitioners to suffering and afflicted humanity. He was a laborious physician, and in that profession, as in everything he undertook, he succeeded, for in his vocabulary, it may be said without exaggeration, there was no such word as fail.

He was married in , to Miss Elizabeth Whitfield Herring, in October, 1837. The estimable lady who plighted her heart and hand to him in the morning march of life, and for forty-two eventful years, shared with him its joys and sorrows, was a watcher at his dying couch, and ministered to his sufferings and received his last adieu on earth to meet again in the home of the hereafter where there will be no more parting. It was a sad scene; the separation of these two whose current of thought and feeling had run into the same channel for so many long years until they had become as one.

In May, 1838, Dr. Vaiden removed to , and after a few months prospecting, he settled permanently in Carroll county, where he died at Prairie Mount [sic], February 6th, inst. Here he engaged in practicing his profession, and also in planting and merchandising. He soon became a man of note in the community where he lived, and though not ambitious of public station, was elected to serve his county in the State Legislature for several terms, one of which was after the war. In every pursuit he developed the higher qualities of intellect and of manhood. He was a born leader of men, and left his impress upon everything he touches. He was the highest type of honor and chivalry. He was a strict man of business; and left nothing about which doubt and misconstruction could arise, in his transactions with his fellow-men. With A.M. West, and others whose names were not so conspicuous before the public, he was a pioneer of that great enterprise the Mississippi Central Railroad and gave his time and talents, and invested his means, for its accomplishments. It stands as an enduring monument to the wisdom and public spirit of its founders. He was a representative man in all works of benevolence, public charity and progress. With characteristic tact, he realized the changes that were wrought by the war, adapted his plans to them, and achieved success and fortune in spite of every obstacle. The climax of the monument he has erected in the hearts of his countrymen, and which is more enduring than the marble shaft that will mark the spot where sleep his mortal remains was his munificent contribution in the cause of education. At the time of his death seventy-four young men were attending the with means which he had placed at their disposal for that purpose. Who will take up the good work where he left it when summoned to the realities of another world? If it is given to the departed to look down from the battlements above to the scenes of their earthly toils and anxieties, how eagerly will he watch the fruits of his good example. Who will carry forward the enterprise to which he gave his heart and opened his purse? His life-book is closed, but the memory of the generous friend, the patriotic citizen, the public benefactor will not fade away."

More information about the Cowles, Mead, and Vaiden families, including a complete lineage for the Mead family, can be found here.

Posted by Janice Tracy at 11:23 AM No comments:

This very old monument marks the burial place of Andrew Y. Hanna, born September 13, 1799. Hanna died September 27, 1871, and is buried in Bethsalem Cemetery near the Bethsalem Presbyterian Church, one of the oldest churches in Choctaw County. A number of other Hanna family members who migrated to Mississippi during the early to mid-1800s are also buried in this old cemetery in the Tollison Community. 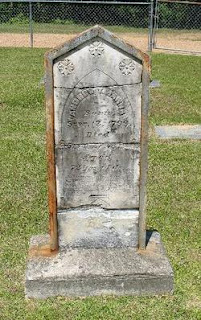 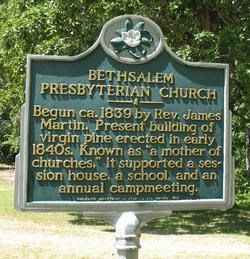 Bethsalem Presbyterian Church
Formation dates back to circa 1839
During the 1800's, the name "Hanna," reportedly Scotch-Irish, appeared in many states throughout the U.S. But the name was an uncommon one in early Mississippi. According to the U. S. Census of 1820, there were two individuals with the name "Hanna" living in Mississippi. James Hanna was enumerated in Amite County, Mississippi, and Josiah Hanna was counted in Warren County. By 1930, Hanna family members living in Mississippi numbered over 300.
Posted by Janice Tracy at 2:48 PM No comments: