The mind is heaven's breath

A spark from yonder sky;

Which 'mid the ruins made by death,

But when the dreams of pleasure, love,

And life's fleet joys are o'er

The mind shall bud anew above 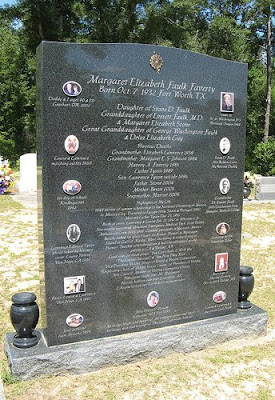 The photographer's description simply said "A very thorough tombstone," and I wholeheartedly agree with that sentiment. It actually defies words and certainly speaks for itself. The headstone appears to be a recently erected one, located not in Attala county, but in another county in Mississippi.

My own reaction when I first saw the photo was one of near shock and disbelief. Not only was I intrigued by the unusual size and design of the stone, I was in total awe of the extensive genealogical story inscribed on the stone. The fact that it features thirteen family pictures is impressive in its own right - what a treasure trove of family information this headstone contains.

But I must ask the obvious question: Why would someone erect such an expensive and such a detailed marker? Were the families listed prominent ones in the history and the development of the community? Large and beautifully carved and detailed headstones historically have served as symbols of the social and economic importance of families throughout years past and continues in our present culture.

Could it be the headstone is the sole marker, a "combined" marker, if you will, for all family members buried in this particular portion of the cemetery?

Whatever the reason, this marker will provide a permanent road map of family history for many generations to come.
Posted by Janice Tracy at 9:58 AM 2 comments: 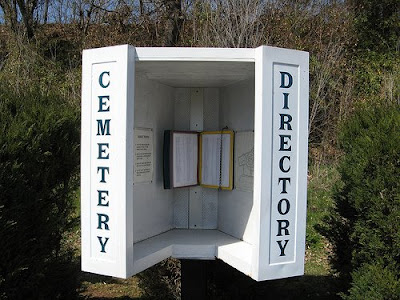 Recently, I stumbled upon some wonderful photos taken by Natalie Maynor of churches and cemeteries in Mississippi, some of which I have used on my blogs. Although Ms. Maynor has taken photographs of churches and cemeteries located throughout the United States and in some foreign countries, it seems to me that she had taken a majority of her photos in Mississippi. Somewhere along the way, I found a website that contained some of her pictures that I had already viewed elsewhere on the web.

According to a writeup on the site, Jim Tipton, its founder, created the website in 1995 to foster his hobby of "visiting the graves of famous people." What he discovered was that many thousands of people living around the world shared his somewhat odd hobby. So what started out as a hobby turned into a livelihood and a passion for Mr. Tipton. Presently, thousands of contributors from around the world have assisted in compiling approximately 27 million records, and through the efforts of volunteers like Ms. Maynor, "thousands of contributors from around the world enter new records, thousands use the site as an education reference tool, and long-lost loved ones are located......"

She says that she loves what she does.

Many of you who are reading this may have already found and used the website above. If you have not visited there, I strongly encourage you to do so. Although the cemetery listings are not always complete, the website includes an abundance of wonderful information that sometimes includes a photo of the deceased, a photo of the headstone, and maybe some genealogical or family history data that often connects family members buried in the same cemetery. Another feature of the website and the project is that photographs and genealogical information can be submitted directly by family members or loved ones.

I hope that we as genealogists and "Graveyard Rabbits" can assist in some way to help complete the information available on this helpful website.
Posted by Janice Tracy at 2:24 PM 2 comments:

One Picture Says It All 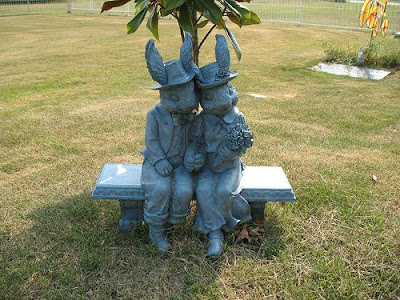 This week, when the religious holiday of "All Souls' Day" and the celebration of Halloween is imminent, I think about the many cemetery traditions of honoring the dead. The most unique one, I believe, is the tradition of "whitewashing" the graves on "All Souls' Day." This tradition is still practiced in the old cemeteries of New Orleans, and it is often a family affair that is followed by attendance at Mass later that day.

Since the beginning of time, families have honored the deceased by placing flowers, holiday wreaths, or winter "blankets" on their graves, especially during holiday seasons or on the anniversary of a birthday or anniversary. Our contemporary practice seems to be the placement of plastic or silk flowers in a vase or an urn that is incorporated as part of the gravestone.

But whatever the practice, and how often it occurs, this tradition still signifies the same thing: we honor our loved ones until the end.
Posted by Janice Tracy at 2:39 PM No comments:

Since Mississippi is one of those states that has many cemeteries of historical significance, the state in 1971 passed House Bill No. 780 that provides for the repair, rehabilitation, and maintenance of abandoned cemeteries. I am providing the text of the Act here today.

CHAPTER 425
HOUSE BILL NO. 780
AN ACT TO AUTHORIZE AND EMPOWER THE RESPECTIVE BOARDSOF SUPERVISORS IN THIS STATE, IN THEIR DISCRETION AND UPON AN APPROPRIATE CERTIFICATE FROM THE TRUSTEES OF THE STATE DEPARTMENT OF ARCHIVES AND HISTORY, TO REPAIR, REHABILITATE, AND MAINTAIN ABANDONED CEMETERIES.


BE IT ENACTED BY THE LEGISLATURE OF THE STATE OF MISSISSIPPI :
SECTION 1.
Upon the official certificate of the Trustees of the Mississippi State Department of Archives and History that any abandoned cemetery is of historical significance and should be repaired, rehabilitated, or maintained as a historical monument, the boards of supervisors of the respective counties in this state are hereby authorized and empowered, in their discretion, to repair, rehabilitate, and maintain any such cemetery within the borders of the county over which such board has jurisdiction.
SECTION 2.
Subject to like certificate from the said Trustees of the State Department of Archives and History, the board of supervisors in adjoining counties may in their discretion, jointly accomplish such repairs, rehabilitation, or maintenance in those instances where the cemetery in question occupies territory which at one (1) time or another was located as a part of said adjoining counties.
SECTION 3.

CRITERIA FOR THE CERTIFICATION OF HISTORICAL SIGNIFICANCE OF ABANDONED CEMETERIES
UNDER THE PROVISIONS OF HOUSE BILL NO. 780
Laws of Mississippi, 1971

I encourage you to visit to the website for the Mississippi Department of Archives and History at mdah.state.ms.us where you will find more information about abandoned cemeteries and their preservation.
Posted by Janice Tracy at 4:17 PM No comments: