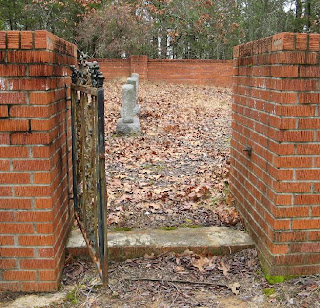 Visitors to the Blackmon plot at Blackmonton Cemetery enter through a heavy wrought iron gate in the brick wall that surrounds it. Buried within the walled plot are Dr. Zachariah Blackmon, his three wives, and several other family members.The cemetery is located near Blackmonton Presbyterian Church, in a rural area of Carroll County, Mississippi, known to those who live nearby as the Wiltshire community. According to a marble marker embedded in one of the brick columns that mark the entrance to the plot, the cemetery was restored in 1979 by Billy and Edith Blackmon, descendants of Dr. Blackmon. 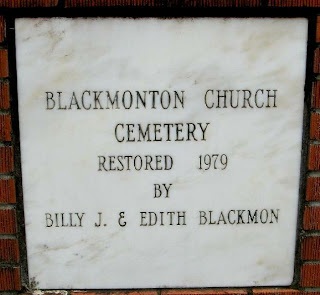 According to this marble marker embedded in one of the brick columns that form the entrance, the area inside the brick walls was restored in 1979 by Billy and Edith Blackmon, descendants of Dr. Blackmon. 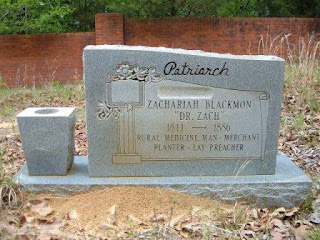 Zachariah Blackmon "Dr. Zach"
b. 1811, d 1886
An updated gravestone has apparently replaced an older one that marked the location of Dr. Blackmon's grave, likely placed there by his descendants during the cemetery's "restoration" in 1979. According to the inscription, "Dr. Zach" was not only a "Patriarch," he was also a "Rural Medicine Man - Merchant - Planter - Lay Preacher." 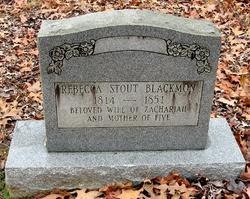 Like her husband's, Rebecca Stout Blackmon's gravestone appears to be a newer replacement. According to her dates of birth and death, Dr. Blackmon's first wife lived to be 37 years old. 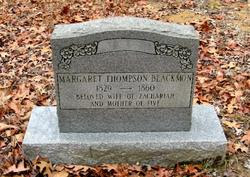 Margaret Thompson Blackmon
Second Wife of Dr. Zachariah Blackmon
b. 1820, d. 1860
Interestingly, Margaret's grave stone bears the same inscription as that of Dr. Blackmon's first wife, "Beloved wife of Zachariah and Mother of Five." Since Margaret Thompson Blackmon lived only 9 years after the death of Dr. Blackmon's first wife, Susan, it is possible the inscription refers to the fact that she was stepmother to the five children born during her husband's marriage to Rebecca Stout Blackmon. 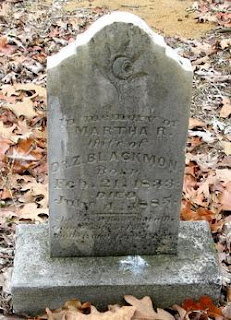 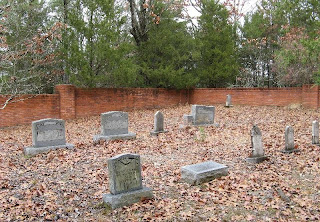 Graves of 9 Blackmon family members are buried
within the brick-walled plot at Blackmonton Cemetery
at Blackmonton Presbyterian Church near Wiltshire
in Carroll County, Mississippi
The graves of several other Blackmon family members are located within the walled plot at Blackmonton Cemetery. Two of those graves belong to sons born during the marriage of Dr. Blackmon and his second wife, Margaret. Andrew John Blackmon's grave marker shows that he was born in 1856 and died when he was 22 years of age, in 1878. This means that he was only four years old when his mother died in 1860. A second son, Charley, was born in January 1859 and died when he was barely one year old, the same year that his mother also died.
Posted by Janice Tracy at 3:17 PM 4 comments: 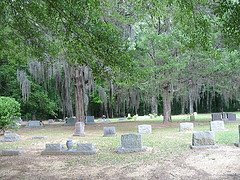 Tougaloo Memorial Gardens Cemetery is located on the campus of Tougaloo College, on County Line Road in Tougaloo, Mississippi, just west of old Highway 51. This well-kept cemetery is one of a number of African American cemeteries in Madison County, where many individuals born in the 1800s are buried. A list of individuals buried in the cemetery in Tougaloo can be found here.
Among those buried in the cemetery at Touglaoo are over a dozen members of the Moman family. This family has had a presence in the United States since at least 1850, when 79 individuals were enumerated that year on the U.S. Census. Among these individuals were a dozen male Moman family members who were born in Ireland, two born in Germany, and one whose birthplace was shown as France. Interestingly, only one individual on the U.S. Census of 1850 was born in Mississippi, and none of the 79 individuals with the name Moman actually lived in the state at that time.

Buried in the cemetery at Tougaloo are several Moman family members who were born after 1850, including Azel, born in 1890, Felix, born February 19, 1884, Preston, born in 1880, and Howard R., born October 11, 1881; other old gravestones in this cemetery that bear the name Moman show no dates at all.

According to the U. S. Census of 1850, the oldest Moman family member enumerated was Nichlous Moman, who was born in Ireland about 1790 and was living in 1850 in Albany, NY. William Moman was the only other male enumerated in 1850 whose birthdate was earlier than 1800. According to the census, William was born in Ireland about 1792 and was living with his wife, Catharine, in Penn, Jefferson County, Iowa. The Moman male living nearest to Mississippi in 1850 was John, whose birthplace was shown as Ireland. Born in 1820, John Moman was living in Baldwin County, Alabama in 1850.
Posted by Janice Tracy at 1:10 PM 1 comment: 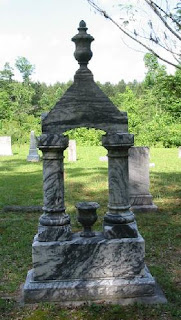 This unique double grave monument marks the burial places of John Bagwell and his wife, S.F. Turner Bagwell in Bethlehem Cemetery, near Ackerman, Mississippi, located in Choctaw County. John Bagwell was born on January 3, 1832, and he died on September 28, 1908. His wife, S.F. Turner Bagwell, was born on September 10, 1842 and died just 6 days after her 63rd birthday.

The base of this large granite monument holds two Tuscan-like columns that provide support for a canopy. Two urns occupy prominent places on the grave marker; an open urn sits on the base between the two columns, and a covered urn graces the top of the canopy.

Bethlehem Cemetery also contains dozens of graves of other early Bagwell family members who lived and died in this area of Choctaw County during the late 1800's and early 1900s.
Posted by Janice Tracy at 3:43 PM No comments: