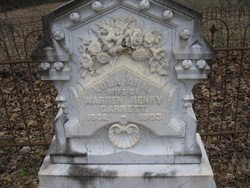 The intricate carvings on the beautiful marble gravestone of Lula Anne Garrett are not only lovely to behold, but the flowers, the dove, and the sea shell are all symbolic of the love and devotion her husband and her family wanted to immortalize with this stone. Lula Anne, born in 1832, and the wife of Warren Henry Garnett, died in 1900. Her grave, along with the grave of her husband, are located in Franklin Cemetery.
Posted by Janice Tracy at 6:42 PM No comments: 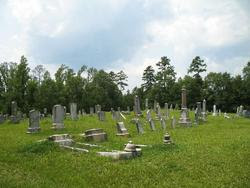 Camden Cemetery, named for the community of the same name, is located near the intersection of Highways 17 and 43. It is a fairly large cemetery in an otherwise sparsely populated area of Madison County, Mississippi, and it contains many old graves. The names of those buried here, like so many others in the state, trace the migration of settlers to Mississippi from a half dozen or so of the former colonies and from a few foreign countries.

One of the graves in Camden Cemetery is graced by a beautiful grave stone, shown here, that marks the burial place of Carthagenia Scott Collier. The marker is the same as one located in Mount Bluff Cemetery near Flora that I wrote about last week. Both markers appear to be made of masonry and metal, likely zinc. 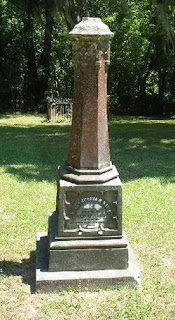 Posted by Janice Tracy at 5:53 PM No comments: 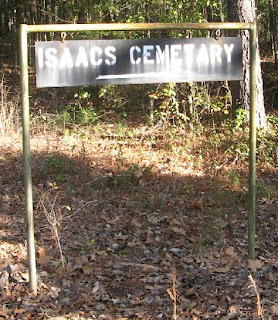 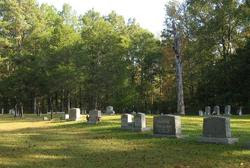 Some cemeteries have tall pillars and ornate gates and sculptures that grace the entrance to the final resting place of those buried there. But the location of Isaacs Cemetery is marked by a simple, homemade sign, with stencil-painted letters that spell out the name. Like so many other cemeteries that began as family cemeteries, Isaacs Cemetery contains the burial places of some of the county's earliest residents, along with those of residents and their families who have died in recent years. This Attala County cemetery is located at McVille, south of Kosciusko, between Highway 43 and the Natchez Trace Parkway, about halfway to Thomastown. In the very early 1800's, this area was still part of the Choctaw Nation. Graves of several Confederate soldiers are located in the cemetery, and markers for four of those graves are pictured below. You will note that the emblem known as the Southern cross appears on each gravestone. 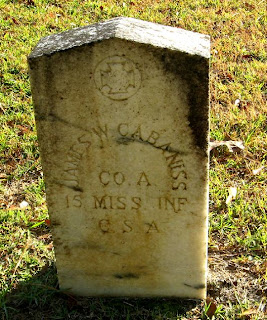 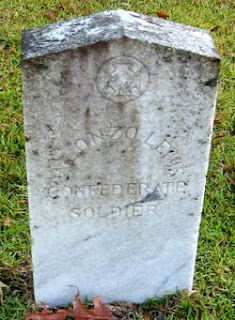 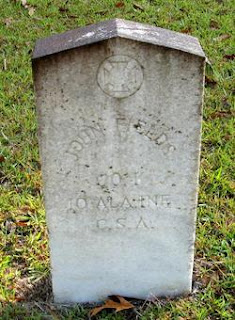 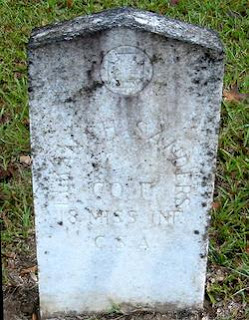 Posted by Janice Tracy at 6:18 PM No comments:


Thank you for reading my blog, and if you are interested to know more about this "graveyard rabbit," check out today's article posted on The Association of Graveyard Rabbits website.

Labels: Meet a Rabbit, The Association of Graveyard Rabbits

A Cenotaph in Brister Cemetery 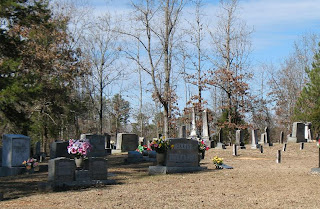 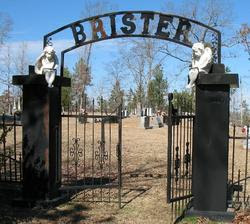 Right: View of the cemetery where old and new stones mark the graves of Attala County residents.

Below: Entrance to Brister Cemetery


Brister Cemetery is located at Hesterville and is believed to have been established in the mid-1840's, when Edmund Brister's sister, Matilda Holland Brister, died and was buried on land that he owned. Although the cemetery began as a family cemetery, it later became a place for members of the public to bury their loved ones. Located in Brister Cemetery is a "cenotaph" erected as a memorial to Morgan Guest/Guess, who served in the War of 1812 in Tennessee. According to the memorial pictured here, Morgan Guest was born in North Carolina on August 22, 1773, the son of Captain Moses Guest, a North Carolinian who served as a Captain in the Revolutionary War. The younger Guest died in Mississippi on February 8, 1853. 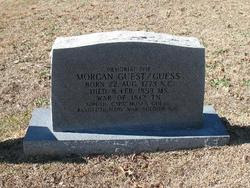 Since this is the first cenotaph this graveyard rabbit has stumbled upon, I decided to look up the word "cenotaph." According to Wikipedia, a cenotaph is "a tomb or a monument erected in honor of a person or group of persons whose remains are elsewhere." The word comes from a Greek word which means "empty tomb." A common example of a cenotaph is a monument or a memorial that is erected and dedicated to a group of individuals for a particular deed or service.

Posted by Janice Tracy at 8:59 PM No comments: 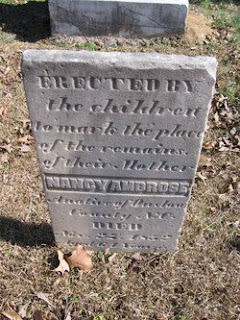 This tombstone, bearing the inscription "Erected by the children to mark the place of the remains of their Mother," marks the grave of Nancy Ambrose, a native of Onslow County, North Carolina. Mrs. Ambrose died in Holmes County, Mississippi, on November 27, 1852, and is buried in Franklin Cemetery. She was 64 years old at the time of her death.

Posted by Janice Tracy at 5:31 PM No comments:

Concord Cemetery in Madison County,
near the community of Loring

The Concord Presbyterian Church and the cemetery of the same name are located at Loring, Madison County, Mississippi, in an area that was once part of Yazoo County. The church is built in a style reminiscent of old wooden churches in colonial New England. Among those buried in the Concord Cemetery are Jesse H. Ewing, an early settler his wife, Martha, and their descendants. 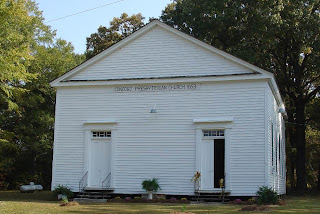 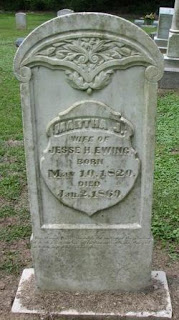 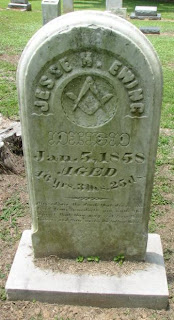 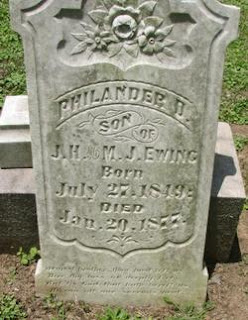 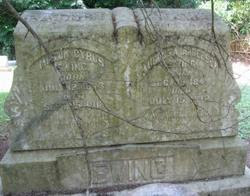 A double gravestone marks the final resting place
of Milton Cyrus Ewing and his wife, Augusta A. Ewing

Milton Cyrus Ewing lies at rest near his parents, a brother, his wife, and two of their children. Milton was born on July 12, 1843, and Augusta was born on December 29, 1844. Exactly two months after Milton buried his Augusta on July 15, 1912, he died and was buried next to her. Near the gra ves of Milton and Augusta are two of their sons, Andrew Joseph and Jessie Carrol.Although Andrew Joseph died a young man at the age of 24, Jessie's small gravestone shows that he died shortly after his first birthday. Three generations of the Ewing family rest in Concord Cemetery. 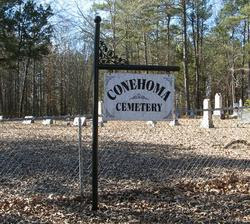 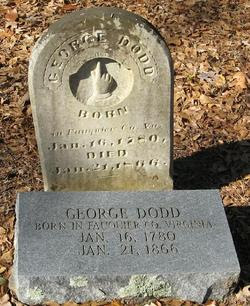 Conehoma Cemetery, located in the Williamsville Community, east of the Natchez Trace Parkway and southeast of Kosciusko, Mississippi, is the burial place for several families who were pioneers to this area during the 1800's. Some of these families include those named Dodd, Hollingsworth, McKee, Nash, and Whittington. One of the early graves in the cemetery is that of George Dodd, patriarch of the Dodd Family in Attala County. According to Mr. Dodd's original grave marker, he was born on January 16, 1780 in Farquier County, Virginia. He died in Attala County on January 21, 1866, just five days after his 86th birthday, a long life for someone who lived during this time and in this place. Another gravestone, a more contemporary one, also marks Dodd's gravesite. And a tombstone similar to that of George Dodd marks the nearby grave of Margaret A. Dodd, who died on September 20, 1857, likely George's wife.

According to the U. S. Census taken in 1850, George Dodd was enumerated in Township 15, Range 8 East, of Attala County. A farmer by occupation, he was 69 years old, with a birthplace of Virginia. Dodd was almost certainly a widower, since he lived in a household headed by Allen Dodd and his wife, Mary E. Dodd. Allen was a farmer, and his assets in 1850 totaled $6,080. Both Mary and Allen were born in Kentucky. Other family members in the household included six young children belonging to Mary and Allen. Names and ages of the Dodd children were James, age 11, Mary, age 9, William, age 7, Narcissa, age 5, Samuel, age 3, and John, age 6 months. All children living in the household were born in Mississippi.

Allen and Mary McKee Dodd, along with two of their children, James and Narcissa, are also buried in the Conehoma Cemetery. Mary's father, James McKee, born on October 2, 1790 in Rockbridge County, Virginia, who died on November 18, 1866, is buried near his daughter and her family. Two families, united by the marriage of their two children, now share a common burial place.
Posted by Janice Tracy at 4:45 PM No comments:

What is the Mysterious Blue Substance on Martha Pickett's Gravestone? 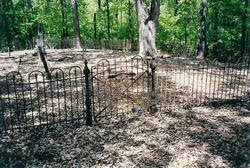 The Clower Cemetery in Holmes County is one of many small family cemeteries in this county, similar to many others in the older counties in the State of Mississippi. You may have heard about one particularly well-known Clower family member, Jerry Clower, who is famous for his humorous stories about local life and lore in his native state. The Clower Family, like so many other families in Mississippi, tend to bury their loved ones either near the church they attended or in a small family cemetery, often named for the family and almost always originally located on land owned by that family. The grave of Purity Clower, the wife of William Clower, likely this family's pioneer, is located here in Clower Cemetery. Purity was born on May 12, 1794, and she died on April 11, 1854. 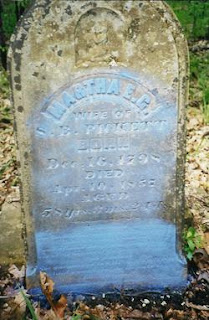 Also buried in the Clower Cemetery is Martha E. G. Pickett, whose grave marker is pictured above. It was readily apparent this very old marker appeared to have had a "blue substance" applied to it. The immediate questions that came to mind were three of the usual five w's: Who, What, and Why? I certainly don't know (at least not yet) who applied the substance to the gravestone. What is a little easier. Based on the traces of the blue substance on the vegetation in front and beside the gravestone, the mystery substance, "appears" to be spray paint. My initial answer to the question of why, is that whoever applied the "paint" may have believed it would cause the engraving to be more readable.

Today, before I wrote this post, I did a little detective work on my own using "google" and some other reference material, but surprisingly, I found nothing that addresses the obvious blue discoloration of the stone. Next, I consulted the Head Graveyard Rabbit who is truly an expert on these things, and he has neither seen nor heard of this particular phenomenon.

So that leaves it up to you, the readers, to help solve solve the mystery of the blue substance that partially covers Martha Pickett's gravestone.
Posted by Janice Tracy at 2:52 PM 3 comments: 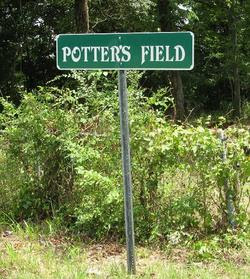 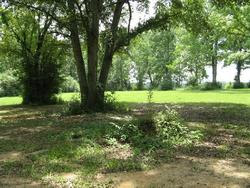 The serene picture to the left is one of an area in Madison County known as "Potter's Field," identified by the simple sign to the right. Almost all of the graves of those buried in this cemetery, located at 800 W. Dinkins Street in Canton, Mississippi, are unmarked.

The Potter's Field cemetery is the location for burials of those who die in Madison County with no family or friends to claim the bodies. In other places, these "potter's field" cemeteries are known as places of burial for unknown or indigent people. There is no information available about how long this Madison County "Potter's Field" has been used for burials or exactly how many people have been buried there.

While researching the term "potters field," I found information in Wikipedia that pointed me to a story told in Matthew 27:7 of the New Testament of the Bible. The story relates how Judas, after his betrayal of Jesus, attempted to return the 30 pieces of silver to Jewish priests. Calling the the coins "blood money," the priests believed it was against the law to return the money to the treasury. Instead, they decided to use the money to purchase land for a burial place for "foreigners." The Valley of Hinnom, located just outside the gates of Old Jerusalem and at the foot of Mount Zion, is believed to be the site of the original "potters field." The name for the burial ground came from the simple fact that local potters used parts of the Valley of Hinnom as a source of clay.

It is interesting to note here that three of New York City's old cemeteries began as "potters fields," and New York City's current potter's field is the largest cemetery in the United States. Situated on Hart Island, this cemetery is the location of approximately 800,000 burials. Because of its history and its size, the cemetery on Hart Island has been the subject of several books and documentaries.
Posted by Janice Tracy at 11:55 AM No comments: