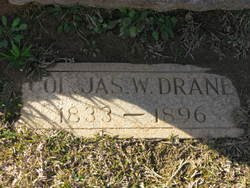 When James W. Drane moved his family to newly formed Choctaw County, Mississippi in 1836, he brought his family and over 20 slaves to live with him near French Camp, Mississippi. He was first married to Matilda Shaw and later to Amelia S. Edwards. Drane was born in Columbia County, Georgia, on February 24, 1808 and died on March 8, 1869. His grave is among those of over a dozen other Drane family members who are buried in French Camp Cemetery near the location of his former home.

When Col. Drane died, the "Jackson Daily Clarion" later the "Clarion Ledger," printed this in its issue dated March 16, 1869: "His elevated character, inflexible will, integrity of purpose, and clear intellect gave him large influence, and at one time he came nigh receiving the democratic nomination for Governor of the State, when a nomination was equivalent to an election. He was a conspicuous member of the class of legislature to which Whitfield, Pettus, Oliver, and their conferes belonged, and who wielded a large influence over the destinies of the State, between the years 1850 and 1860."
Posted by Janice Tracy at 1:33 PM