James B. Yellowly, A Founding Father of Ridgeland, MS 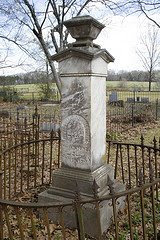 Tombstone of James Burrough Yellowly, b. NC
Buried in The Chapel of the Cross Cemetery
Madison (Madison County) Mississippi
The name "Yellowly" is a name that is deeply entrenched in the history of Ridgeland, Mississippi, the largest city in Madison County. Around 1853, James Burrough Yellowly migrated to early Madison County from his native Halifax County, North Carolina. While Yellowly was still living in North Carolina, he was a well-known physician and a teacher of medicine. He was also well-known as a member of the Philanthropic Society at the University of North Carolina, a society that was instituted on August 1, 1795.

When Yellowly arrived in Madison County in 1853, he purchased a parcel of property from a man named William J. Austin. The community that developed in this location was known as "Jessamine," in honor of Mrs. Yellowly. According to the U.S. Census Slave Schedule of 1860, J. B. Yellowly owned 110 slaves. This location in Madison County, known later as "Yellowly's Crossing," is now a portion of the City of Ridgeland, Mississippi. After the Illinois Central Railroad came through the area in 1865, the community was known as "Yellowly's Switch."

Later, Edward M. Treakle and Gorton W. Nichols purchased this land from Yellowly, along with some land from others, and established the "Highland Colony Co." After their purchase was surveyed and platted, a town hall was built, and the village around it was named "Ridgeland." One of the newer streets in Ridgeland is named "Yellowly Drive " as a reminder of the Yellowly family and its involvement in the formation of the town.

Jessamine Cemetery, located in the original community of Jessamine, and one of the many old cemeteries in Madison County, occupies a beautiful wooded area next to the Natchez Trace. The cemetery, which has an old and a new section, was once outside the city limits and at the end of a narrow dead-end road. After years of development around it, the cemetery, maintained by the city and better kept than ever, is surrounded on three sides by over a hundred homes all built within the last 20 years or so. It is in this cemetery that my parents, whose headstones are already in place, will be buried.

Ironically, Yellowly is not buried in Jessamine Cemetery, but in the cemetery at The Chapel of the Cross, along with his sister, Elizabeth, and another relative named Willie Yellowly. Although I have been unable to locate the grave for Yellowly's wife, I did find that a son, also named James B. Yellowly, who was born on October 7, 1848 and who died on June 6, 1914, is buried in Jessamine Cemetery. His wife, Sarah, born in Wisconsin, is buried there beside her husband.
Posted by Janice Tracy at 8:36 AM