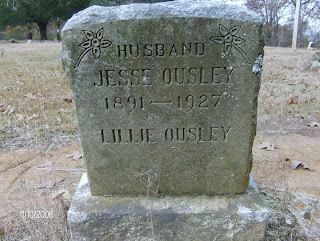 According to the the U. S. Federal Census of 1900, Jesse was five years old and living with his parents, Frank and Edna E. Ousley, in District 5 of Warren County, near Vicksburg, Mississippi. Frank Ousley, the head of the household, was shown to be 47 years old, and his wife, Edna, was 33.

Also enumerated in the household headed up by Frank were five sons, including Jesse, and two daughters named Cora, age 9, and Carrie, age 2. Jesse's brothers were Edward, age 14, Tony, age 12, Willie, age 8, and Samuel, who was 2 months old. Both sets of parents of Frank and Edna Ousley were born in Alabama, and the couple were shown to have been married for sixteen years at the time the census was taken. The census record showed "farmer" as Frank's occupation, and his sons, Edward and Tony, were each shown to be "farm laborers." Cora, the older of the two girls, was shown to be "at school." The racial designation shown for all family members was "White."

According to the U. S. Census taken in 1910, there were 126 individuals with the surname of Ousley, Owsley, or Ausley, who lived in the State of Mississippi. Twenty-four of those enumerated resided in Attala County, twenty-two in Holmes County, and thirty-eight in Madison County. Jesse's family of nine was the only Ousley family living in Warren County, Mississippi in 1900.

Of the 38 individuals appearing on the U. S. Census of 1910 of Madison County, 17 of these individuals lived in the Camden Community, where Jesse is buried. Many of the individuals with the Ousley surname who were enumerated in Attala, Holmes, and Madison counties around the turn of the century were shown on the census with the racial designation of "White." A few of those enumerated were shown as "Mulatto." But the majority of Ousley family members enumerated on census records in 1900 and 1910 in Mississippi were shown to be "Black."
The name "Ousley" is believed to have originated in Southern England, and is likely a combination of the name of a river, "Ouse" and the Old English word "le-ah" meaning "wood." Other derivations of the name include Owsley, Ausley, Oursley, and Owseley. William Owsley, believed to be the first member of this family to leave England, settled in the West Indies in 1656. Sarah Ously settled in Philadelphia in 1674, and John Ousely emigrated to Philadelphia in 1876.

When Jesse died in 1927, he was only 36 years old. There is no information available to establish the cause of his early death. Jesse's gravestone shows "husband" and the name "Lillie Ousley" apparently his wife, is engraved near the bottom. Since no date of death has been engraved on the stone underneath Lillie's name, it is likely that she may have remarried after Jesse died and is buried elsewhere.
Posted by Janice Tracy at 2:28 PM