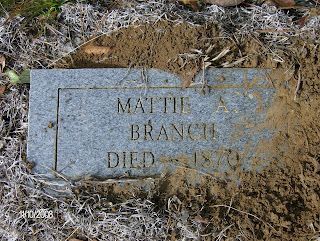 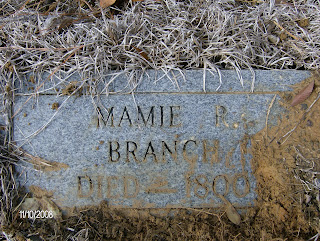 The two gravestones here lie next to each other at Good Hope Baptist Church Cemetery near Camden, Mississippi, and are located to the right of Edward Arthur Branch's Woodmen of the World marker. Edward's grave marker and these two headstones are the only markers in the cemetery that bear the name "Branch."

You may notice the ground around the marker has been disturbed. Because the area had received a large rain just days before our visit, it was necessary to remove wet dirt and sand from the sides and top of each marker to read the dates of death.

On Mattie's gravestone are the words "died - 1870." Mamie's marker bears the words "died - 1800." The markers are identical, and both appear to be fairly new. I believe they are likely replacement markers for old ones that were concrete and were no longer readable. The dates on the marker, however, have created yet another "Branch Family Mystery."

The facts are this: Mattie Allen Branch was Edward Arthur Branch's mother, wife of Joseph Arthur Branch. But she could not have died in 1870. According to the U. S. Census taken in Mississippi in 1850, Edward A. (E.A.) Branch was 52 years old, with a date of birth of 1798. Their son, Joseph Arthur, was a small child. Joseph married Mattie Allen, and they became the parents of my great-grandfather, Edward Arthur Branch, their only son. Edward died in of cancer in 1915 at the age of 43. His mother could not have died in 1870, since her death would have pre-dated Edward's birth which occurred in 1872.
And just who is Mamie R. Branch? Was she an elderly aunt, unmarried when she died, or was she a woman whose maiden name began with the letter "R" and who married someone named Branch who arrived in Mississippi before Edward Tillman Branch and his wife, Winiford Ragland, were married in Hinds County in 1830?

I recall reading another blogger's advice recently that we should not take as gospel the information on a replacement gravemarker or tombstone. Could the dates of death on the headstones of Mamie and Mattie Branch be incorrect?

The mystery remains, and I feel a need to unravel it. And once again, I will open another chapter in the search for my Branch ancestors.