The Chapel of the Cross 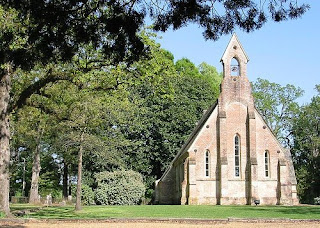 The Chapel of the Cross is a beautiful example of Gothic architecture and a landmark in Madison County. This area of Madison county has always been one of my favorites. The pastoral setting for the 150-year old Gothic structure on Mannsdale Road (Hwy 463) contains dogwoods, cedars, oaks, and magnolias and is one of both Southern charm and serene beauty. The church and its cemetery are very near what once was Annandale Plantation, and are now the center of an Episcopal parish that numbers somewhere around 1000. Over the coming weeks, I plan to write about the church's history, its legends and the residents of Madison County who are buried in its old cemetery surrounded by ancient trees and wrought iron. One of those residents whose story I plan to tell was James Yellowly, a man who was instrumental in the founding of Madison County.

But perhaps the most well-known individual buried in the Chapel of the Cross Cemetery was Henry Grey Vick, who was not a resident of Madison County at all. Vick had the distinction of being related to the Vick family, for whom the city of Vicksburg, Mississippi is named. A very wealthy man, Vick lived in the Mississippi Delta, where he owned a large plantation at Nitta Yuma. But Vick was best known in Madison County as the intended bridegroom of Helen Johnstone, the daughter of the owner of Annandale Plantation. The story of the love affair between Helen Johnstone and her beloved Henry, and how he was buried in The Chapel of the Cross Cemetery, is something that I plan to include in the story of The Chapel of the Cross and its cemetery.