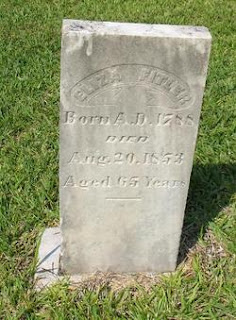 The grave of Eliza Fitler is located in Camden Cemetery in Madison, County. Her simple grave stone shows that she was born in 1788 and died on August 20, 1853, when she was 65 years old. 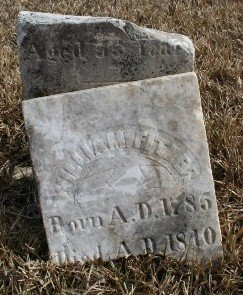 The broken grave marker of William Fitler, stating he was born in 1785, is located nearby. According to the marker, Fitler died in 1810. Although not proven, it appears likely that William and Eliza were husband and wife. 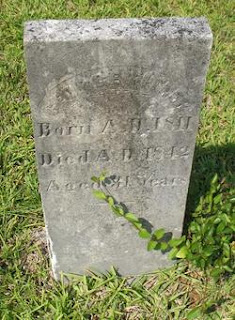 George Fitler is also buried in Camden Cemetery, and his marker states he was born in 1811 and died in 1842. Although I have found no proof of George's relationship to Eliza and William, his date of birth and the proximity of his grave to theirs indicates he may have been their son.

The name Fitler, well-known in Philadelphia, with Fitler Square named for Edwin H. Fitler, a former mayor of Philadelphia in the 19th century, has never been a common name in Mississippi. But in the early 1800's, as evidenced by U. S. Census records taken in Mississippi, some members of this Pennsylvania family migrated to Mississippi and lived in Madison County and in Issaquena County. The earliest appearance of the name Fitler on a U. S. Census recorded in Mississippi was in 1850, the first such census to document a resident's place of birth.

Twenty (20) individuals named "Fitler" were enumerated that year in the the United States. Only two persons with this family name resided in Mississippi in 1850, Eliza Fitler, age 60, born in New York, and Louisa Fitler, a Pennsylvania-born 28 year old. Although this particular census did not show relationships of household members to each other, it is possible that Louisa was Eliza's daughter. Among the neighbors of Louisa and Eliza in Madison County was a blacksmith from Georgia, a merchant born in Kentucky, a Scottish-born tailor, a tanner from Virginia, and a Tennessee-born planter. Eliza and Louisa Fitler, according to the census, were not wealthy, since the value of their personal property and real estate was valued at only $200.

Fifteen of the remaining eighteen individuals with the surname Fitler, enumerated on the 1850 census, lived in Philadelphia. Two resided in Lancaster, Pennsylvania, and one made his home in Tioga, New York. Germany was listed as the birthplace of two individuals, and another was shown to have been born in England. A list of these individuals, including their places of residence, dates of birth, and places of birth, as they were recorded on the U. S. Census of 1850, appears here:

In 1860, when the U. S. Census was recorded, a household headed by Theodore Fitler, a 45-year old "planter," appears in the record for Issaquena County, Mississippi. Included in the household was Theodore's spouse, S. L. Fitler, 38, a daughter, Mary J., age 7, and three sons, Charles L., age 11, Eugene B., age 9, and George D. W. Fitler, age 5. Although Theodore's birthplace was shown as Pennsylvania, all other family members were born in Mississippi. While there is a strong indication that Theodore was related to Eliza, Louisa, William, and George Fitler, I have found no tangible evidence that establishes what relationship, if any, Theodore had to these individuals.

When the 1860 census was recorded, Theodore was already a large landowner and a wealthy man, with the value of his real property shown as $18,000 and his personal property as $20,000. The fact that an area of Issaquena County, Mississippi today is still known as "Fitler" is a lasting indication of the family's once sizable land holdings in that county.

Although 57 individuals with the surname "Fitler" were recorded in the United States in 1860, I did not find Louisa Fitler's name. Louisa may have married after Eliza's death in 1853, but it seems unlikely, since "Louisa Fitler" is the name that appears on her grave stone in Shiloh Cemetery, near Cameron, also in Madison County. According to the inscription on Louisa's marker, she died on October 13, 1874 at the age of 61.

Next: Fitler Family's Shrock Connection
Posted by Janice Tracy at 11:29 AM