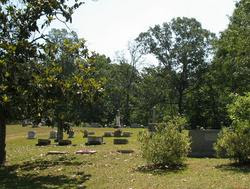 Gulde Cemetery, also known as New Prospect Cemetery, is located in Rankin County, Mississippi. Among the graves in this cemetery are those of William E. Gilmore and his wife, Marguerite Coogle Gilmore. The inscriptions on the double grave markers state that Marguerite was born in Knox County, Indiana, on October 5, 1872, and her husband was born on June 22, 1866, in Harrison County, Indiana. According to the inscriptions, William died on June 16, 1936, and Marguerite died a little more than ten years later on November 3, 1946.

But these grave markers contain more than names, dates of birth, and dates of death. The inscriptions on them also contain the names of the deceased couple's parents. William was the son of Mary and Ephraim Gilmore, and Marguerite was the daughter of Elizabeth B. and John E. Coogle.

As a family history researcher, I think this information is a real find for descendants of Marguerite and William Gilmore. It was certainly enough information to trace these two families' ancestry back another generation.

My search revealed that William Gilmore, age 36, was the head of a household in Knox County, Indiana, when the U. S. Census was taken in 1850. According to the census record, he was born in Iowa, worked as a farmer, and owned real estate valued at $780. His household included his wife, Elizabeth, age 33, who was born in North Carolina, and six children. Names and ages of children enumerated in the household were Catherine, age 10, Ephraim, age 8, William, age 5, John, age 4, Sarah, age 2, and James M., who was only 7 months when the census was taken. Ephraim, who was 8 years old in 1850, would have been 24 when William E. was born in 1866. And it is very likely that William's middle initial stood for "Ephraim."

In 1870, the U. S. Census record shows that Ephraim and his wife were still living in Knox County, Indiana, with Vincennes shown as their post office. They were living with their children William, age 4, and Mary, age 2. Another individual, Sarah Kindrick, age 14, was also shown in the household. Like his father, Ephraim was a farmer, and his property, including real estate, was valued at $4,100. Although I was unable to locate Ephraim in the U. S. Census of 1880, taken in Indiana, I did find him enumerated as a "boarder" in a household of other boarders, with an occupation shown as "proprietor of saw mill."

Research for the Coogle family in Indiana revealed that John Coogle, Marguerite's father, was 15 years old when the U. S. Census of 1850 was taken in Vincennes, Knox County. His parents were William Coogle, 40 years old, and Charlotte, age 36. According to the census record, William was born in Indiana, and Charlotte's birthplace was Kentucky. Other children enumerated in the household were Susan, age 16, Mary, age 12, William, age 10, and Laura, age 8.

Since the name Marguerite raised a question for me about possible French ancestry, I looked for clues about her name while searching census records. What I found was that Coogle is a fairly uncommon name, and that some of the males were born in locations in Europe, including Wurtenberg, Germany. Possibly, Marguerite was named for a European grandmother.

It is difficult to say why the William E. Gilmore and Marguerite Coogle Gilmore moved south and eastward to Mississippi, so far away from Indiana. Theirs was a "reverse migration path," so to speak. Perhaps it was Marguerite's decision to inscribe their parents names' and their places of birth on the grave stones in hope their descendants would always have the knowledge of their ancestors' beginnings.