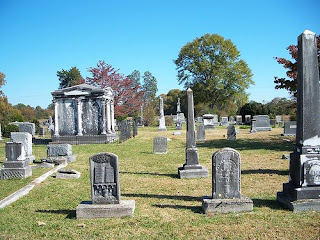 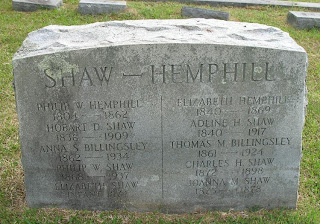 At first glance, the large grave marker shown here in Evergreen Cemetery, located in North Carrollton, Mississippi, appears to be a combination marker for a number of deceased members of the Shaw and Hemphill families who died during the past century and a half. But closer scrutiny of the engraved names reveals that Anna S. Billingsley and Thomas M. Billingsley, who died in the early 1930's, are among the ten names listed on the stone.
This monument marks one of over 2,000 graves in this large old cemetery about 10 miles from Greenwood, Mississippi, the county seat of Leflore County. Evergreen Cemetery is very near Malmaison, the home of Greenwood Leflore, the last Chief of the Choctaw Nation and later, a Mississippi statesman. In fact, several of Leflore's descendants and their relatives are buried here in this cemetery. Others are buried in the Leflore Cemetery nearby.
Once a thriving agricultural area with a large population, North Carrollton is now a small town with barely 500 residents.
Posted by Janice Tracy at 8:11 PM