The Black Knight of the South 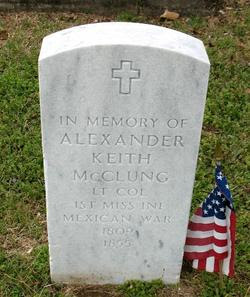 A nephew of Chief Justice John Marshall, Alexander Keith McClung was allegedly born in Virginia around the turn of the 19th century. His date of birth differs, according to the source, but an approximate date appears to be somewhere between 1809 and 1811. By all accounts, McClung arrived in Mississippi about 1832. According to most sources, McClung lived a life of reckless abandon, a man with more than a few less than desirable habits that created feelings of both admiration and fear in those who knew him. Like his uncle, McClung became a lawyer, but he seemed to have more interest in dueling and writing poetry than in studying and interpreting the law. He became somewhat of a "folk hero" after his involvement in several infamous duels in Vicksburg that left eight members of the Menifee Family of Kentucky dead. McClung's reckless bravery and often strange and somewhat morbid behavior, seem to be the basis for being referred to as "The Black Knight of the South."

McClung's reputation as a duelist and as a man who was often moody and melancholy apparently did not prevent him from being popular among the ladies. One of McClung's admirers, a Mrs. Clay, who met him while visiting her uncle in Columbus, Lowndes County, Mississippi, discusses her relationship with McClung in her memoirs. Clay describes him as "...the gallantest lover that ever knelt at a lady's feet." Almost betrothed to him as a very young woman, the writer expressed her concern about his "fitful, uncertain moods" and "....periods of deepest melancholy." Mrs. Clay further explained her fear for him when he was away by telling how McClung would "...mount his horse, named 'Rob Roy,' wild and untamable as himself, and dash to the cemetery, where he would throw himself down on a convenient grave and stare like a madman into the sky for hours." Perhaps McClung's cenotaph is located in the same cemetery referred to by Mrs. Clay in her writings.

While serving in the Mexican War, McClung's fearless disposition earned him the rank of Lieutenant Colonel in the 1st Mississippi Infantry. Legend has it that McClung returned from the war with two fingers missing on his left hand, the result of being hit in the hand by a stray bullet as he charged forth carrying the American flag. McClung's service in the Mexican War was apparently later rewarded by an appointment as U. S. Representative to Bolivia between 1849 and 1851.

In 1855, Alexander Keith McClung, lawyer, poet, and a veteran of deadly duels and a war, died alone in a hotel room in Jackson, Mississippi, apparently from a self-inflicted bullet. Just as he had been drawn as a young man into a cemetery during times of distress and unrest, McClung seemed to have been drawn by his own demons into death. He is buried in Vicksbrug, Mississippi, in Cedar Hill Cemetery.

The poem below was among the deceased man's belongings when he was found.

Swiftly speed o'er the wastes of time, Spirit of Death.
In manhood's morn, in youthful prime, I woo thy breath.
For the glittering hues of hope are fled Like the dolphin's light;
And dark are the clouds above my head as the starless night.
Oh, vainly the mariner signs for the rest
Of the peaceful haven,
The pilgrim saint for the shrines of the blest,
The calm of heaven;
The galley slave for the night wind's breath,
At burning noon;
But more gladly I'd spring to thy arms, O Death,
Come soon, come soon. 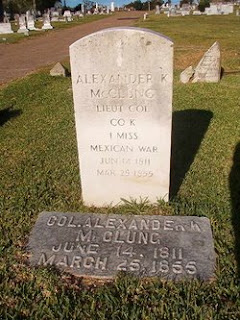 A Belle of the Fifties; Memoirs of Mrs. Clay, of Alabama, Covering Social and Political Life in Washington and the South, 1853-66, by Virginia Clay-Clopton, 1905