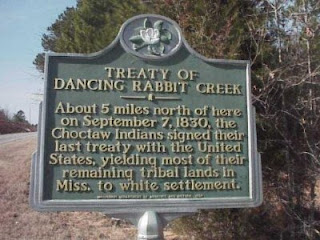 The Treaty of Dancing Rabbit Creek was ratified by the U. S. Senate on September 15, 1831, and its ratification resulted in the Choctaw becoming the first of "The Five Civilized Tribes" to be removed under the Indian Removal Act of 1830. By 1832, tens of thousands of Choctaw people would begin the long journey to Oklahoma Territory. That journey, one that spanned several hundred miles and lasting many months, resulted in many lives that were lost along the way. That journey is known as "The Trail of Tears."
Posted by Janice Tracy at 11:01 AM