Samuel Curry's gravestone in the A.R.P. United Presbyterian Church Cemetery in Oktibbeha County, Mississippi, near Starkville, bears an engraving of the scales of justice, a symbol that means "truth" or simply "justice" and often links one to the legal profession. But Samuel Curry was a farmer, not a lawyer. I was unable to find Samuel Curry's household on the U. S. Census of 1850, although I did find his name on the Slave Schedule of 1850 as living near Starkville, Mississippi and the owner of 39 slaves.

Curry's household did appear on the U.S. Census record taken in 1860, and this record shows that Curry was 65 years old. His household included his wife, Mary, age 50 and two other adults identified as Isabella Mooty, 30, no relationship shown, and John B. Pope, age 24, an "overseer." According to the census record, in 1860, Samuel owned $21,400 in real estate and $6500 in personal property. Inscribed on Curry's grave stone, along with his dates of birth and death, is his place of birth, "Fairfield District, S.C." The inscription near the bottom reads "As for man, his days are as grass, a flower of the field so he flourishes." 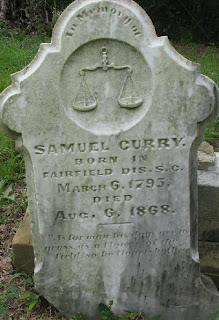