To the right is a picture of the monument which marks the grave of McKinney Carr, who is buried in Buffalo Cemetery, near Buffalo United Methodist Church, in Attala County, Mississippi. According to the inscription on the grave marker, Mr. Carr was born on February 9, 1897 and died on February 7, 1974. 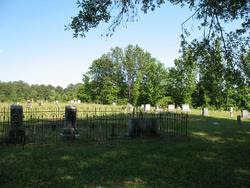 McKinley Carr's grave marker displays an interesting set of emblems that represent major facets of this man's life. The monument itself appears to be a Woodmen of the World marker, although the emblem that symbolizes that organization is not visible. On the left "branch" of the monument is a Masonic symbol, and on the right is the emblem that symbolizes Mr. Carr's advancement in the Masonic Lodge to the level of 32nd Degree Mason. The Great Seal of the United States of America appears at the very top of the monument. Although I am unsure why the Great Seal of the U.S. is present, it is apparent that Mr. Carr may have been affiliated with the U.S. Government in some way, since the inscription at the bottom of the marker states "The United States of America honors the memory of McKinley Carr."