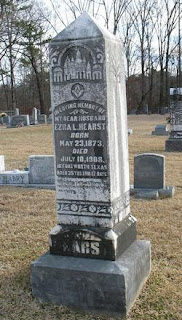 Seneasha Cemetery, located near Seneasha United Methodist Church, has many old graves of deceased individuals who were born in the 1800's. One of those graves is that of Ezra L. Hearst, who was born May 23, 1873, and who died on July 10, 1908. A number of other Hearst family members are buried in Seneasha Cemetery, near Newport, Mississippi, as well as members of several allied families, including Dickerson, Donald, Holley, McDaniel, Mabry, and Presley.

The monument at the gravesite of Ezra Hearst includes an inscription that states "In Memorium to the Loving Memory of My Dear Husband." Above the inscription are engravings of the fronts of buildings similar to the design of those in Jerusalem or elsewhere in that region of the world. A masonic symbol also appears near the top of the stone. The name HEARST is engraved near the bottom of the monument, and an inscription honoring the deceased states "His mightiest pursuits form the noblest monument to his memory." According to his monument, Ezra L. Hearst died in Fort Worth, Texas when he was only 35 years old.

According to the U. S. Census taken in 1900, Ezra headed up a household in Newport, Attala County, Mississippi, that included his wife, Ida F. Hearst, born in April 1870, and Elizabeth V. Turner, born in September 1843. Ezra's occupation was shown to be that of "farmer." The birthplaces of Ezra and Ida Hearst were recorded as "Mississippi." Elizabeth Turner, according to the census record, was Ezra's mother-in-law, a woman who was born in 1843 in South Carolina to parents who were born there, as well. In 1900, the Hearst family lived near families with the names of Clower, Donald, Flowers, Nichols, O'Leary, and Ousley.

I have been unable to discover the cause of Ezra Hearst's death in Fort Worth, Texas, over five hundred miles west of Attala County, Mississippi. Based on the loving and respectful inscriptions on his grave marker, I can only imagine that Ezra Hearst must have died a hero.
Posted by Janice Tracy at 5:31 PM