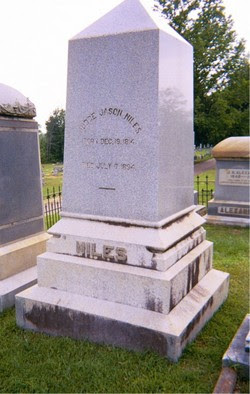 The grave marker shown here is that of Judge Jason Adams Niles, who was born on December 19, 1814 in Burlington, Vermont. After graduating from the University of Vermont, Jason Niles became a teacher.

While still a young man, Niles settled in Attala County, Mississippi and subsequently became a lawyer, where he was active in state and local politics for over 40 years.
Judge Niles served as a circuit judge for the 13th Judicial District from 1871 to 1872, and in 1872, he was elected to the 43rd congress, where he served one term. Judge Niles died on July 7, 1894, just a few months before his 80th birthday, and he is buried in the Kosciusko City Cemetery. The diary kept by Judge Niles between the years 1861 and 1864 is a popular tool among Attala County genealogists, since it contains an account of everyday life in Attala County during the Civil War. A link to an electronic copy of the diary, now maintained by the University of North Carolina at Chapel Hill, can be found on the Attala County Memories blogspot, located at http://www.attalacountymemories.blogspot.com/
Posted by Janice Tracy at 12:25 PM